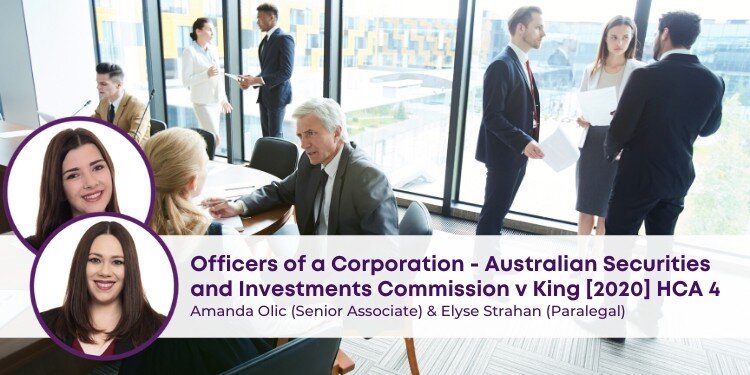 On 11 March 2020, the High Court of Australia handed down a landmark judgment in the case of Australian Securities and Investments Commission v King [2020] HCA 4. The unanimous judgment provided a clear interpretation of the term ‘officer’ in section 9 of the Corporations Act 2001 (Cth) (“the Act”).

Section 9 of the Act, defines an officer of a corporation to mean:

“(a) a director or secretary of the corporation; or

(i) who makes, or participates in making, decisions that affect the whole, or a substantial part, of the business of the corporation; or

(ii) who has the capacity to affect significantly the corporation’s financial standing; or

Mr Michael King was the CEO and executive director of MFS Ltd, a parent company of the MFS Group.  MFS Investment Management Pty Ltd (“MFSIM”) was a subsidiary. MFSIM was a financial service provider and Premium Income Fund (“PIF”) was one of its largest management investment schemes.

On 29 June 2007, MFSIM entered into a $200 million loan facility with the Royal Bank of Scotland (“RBS”). The loan facility was to be used only for the purpose of the PIF.

ASIC brought proceedings against Mr Michael King as senior personnel of the company, arguing that he had breached his duties as an officer, despite the fact that his directorship ended on 27 February 2007. ASIC contended that he fell with paragraph (b) (ii) of the definition in section 9 of the Act.

The Court of Appeal held that Mr King did not fall within this definition because any capacity he had to affect the financial standing of MFSIM did not stem from his occupation of office in the sense that he was not a “recognised position with rights and duties attached to it”.

ASIC appealed this decision to the High Court.

In a unanimous decision, the full bench found that the Court of Appeal had erred in their finding.

The bench showed a departure in the literal application of the definition in section 9 and found that section 9 (b) (i) and (b) (ii) is not limited to those who hold a named office position such as Director, or a “recognised position with rights and duties attached to it”. The Court found that Mr Michael King acted as the “overall boss” of the MFS Group and therefore assumed overall responsibility for MFSIM and that, that alone is enough to establish that Mr Michael King could affect the financial standing of the company.

Nettle and Gordan JJ identified a range of factors, which are not conclusive, that can assist in determining whether the individual had capacity to affect the financial standing of the company:

ASIC Commissioner John Price made comment on this decision which highlights its significance in the corporate world. He said that ‘it pro­vides clear guid­ance on who is an  “offi­cer” of a cor­po­ra­tion and estab­lish­es that the duties and respon­si­bil­i­ties to a com­pa­ny, its cred­i­tors and share­hold­ers under the Act will apply to indi­vid­u­als who have the capac­i­ty to sig­nif­i­cant­ly affect the finan­cial stand­ing of a company’.

Amanda is our Head of Commercial and has experience in providing legal advice on a broad range of commercial law matters. Amanda has provided advice to small to medium companies and international companies in relation to contractual advice, employment policies and agreements, disputes and litigation. 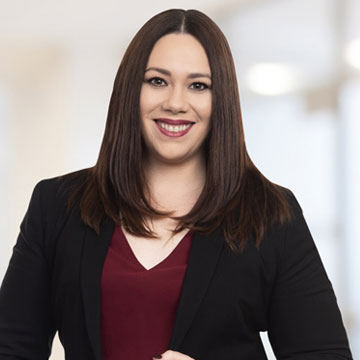