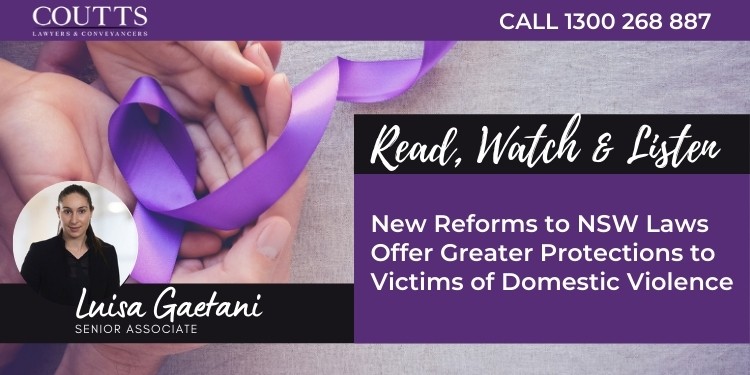 The NSW government has introduced a bill to offer greater protections to victims of domestic violence giving evidence in court proceedings. The reforms will enable victims of domestic violence to give evidence remotely or in closed court. Previously, this option was only available to sexual assault complainants, children, or people with cognitive impairments. Further, victims of domestic violence will also be entitled to have a support person with them whilst giving evidence and new directions will be given to juries in relation to delayed reporting. There are also proposed changes to extend the terms of AVOs in circumstances where the offender is sentenced to a term of imprisonment as a means of providing greater protections to victims.

Attorney-General and Minister for the Prevention of Domestic Violence, Mark Speakman, has tabled a bill in parliament which would reform the means by which victims of domestic violence are able to give evidence in court proceedings, change the directions given to juries in relation to delayed reporting, and offer greater protections to victims in AVO proceedings.

The reforms recognise the complexity of domestic violence relationships and the long-lasting psychological impacts domestic violence can have on victims. A Parliamentary Inquiry into Domestic Violence published on the 24 November 2015 identified that the most common reasons for victims not reporting incidents of domestic violence include fear of the perpetrator, feelings of shame and embarrassment, fear of not being believed, and fear of psychologically re-living the incident.

Under the reforms, an amendment to the Criminal Procedure Act will create a new jury warning in circumstances where a victim in domestic violence proceedings delays making a complainant about the alleged offence or fails to make a complaint altogether. The direction means that the court will have to warn the jury that absence of complaint or delay in making a complaint does not necessarily mean the allegation is false, rather, that there are a variety of reasons why victims of domestic violence fail to come forward. However, it will still remain open to the jury to make a finding that the delay in complainant is relevant to the credibility of the victim if there is sufficient evidence to support this proposition.

Further, the bill introduces a provision to the Crimes (Domestic and Personal Violence Act) whereby if an offender is sentenced to a term of imprisonment, the ADVO ordered by the court is to remain in place for the entirety of the prison sentence and an additional two years after the end of the term of imprisonment. This means that victims will be protected by the conditions of the ADVO even after the perpetrator is released from gaol.

For many victims, the prospect of having to give evidence in the presence of their perpetrator or in an open courtroom can be incredibly distressing and discourage them from reporting the matter to police or from giving evidence in court. As expressed by Mr. Speakman, “Attending court can be overwhelming for victim-survivors who’ve suffered terrible abuse. Our reforms sought to ease that burden to ensure they are supported during criminal proceedings, particularly while giving evidence,”. It is hoped that the reforms will provide greater protections to victims of domestic violence and increase victim attendance rates and the finalisation of matters in court.

Luisa is a Senior Associate at Coutts and head of our Family and Criminal Law divisions. Luisa has practiced solely in the areas of criminal and family law. It is her sensitive yet pragmatic approach that has allowed her to develop a strong rapport and build trusting relationships with her clients. Should a client’s matter proceed to court, Luisa has the skillset and experience to assist her clients through this process and where required, will draw upon her network of barristers to further benefit her client’s outcomes.