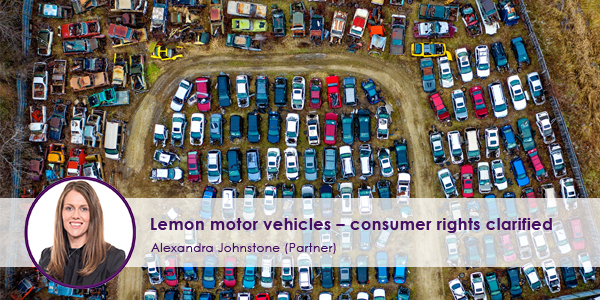 On 8 September 2018 the Australian Consumer and Competition Authority (ACCC) published an updated guide in relation to the application of the Australian Consumer Law (ACL) to motor vehicle sales and repairs. Although this publication does not constitute legal advice or a definitive guide as to when the ACL applies, it does provide some useful legal guidance for consumers in respect of defects and failures in new and used motor vehicles.

A link to the guide can be found here.

On 1 January 2011 the ACL was introduced as a uniform consumer protection law across Australia. As the law is relatively new, there is a measure of uncertainty in relation to parts of its practical operation – hence the publication by the ACCC of the above guide.

The ACL prescribed a set of “supplier” and “manufacturer” guarantees which apply to all consumer transactions across Australia.

Under the ACL, where there has been a breach of one of the prescribed guarantees, the remedy to which a consumer is entitled, depends on there has been a “major” or “minor” failure to comply with the consumer guarantee. These are concepts new to the law in Australia.

If a vehicle suffers from a “major” failure, then the consumer is generally entitled to elect to:

In addition, the consumer may be entitled to compensation for any foreseeable loss suffered by the consumer as a result of any breach of the ACL guarantees.

What are “major” and “non-major” failures

The ACL prescribes a “major” failure as occurring where:

A “non-major” failure is a failure which does not amount to a “major failure” as defined above.

Clarification as to “major” and “non-major” failures

Since the introduction of the ACL there has been a lot of uncertainty in the motor vehicle industry as to when a defect will amount to a “major” defect – particularly when the vehicle is no longer new. Given the infancy of the ACL, there have only been a handful of cases which have considered the application of the ACL in the context of defective vehicles. Hence, the publication of the guide by the ACL provides some measure of clarification to the industry and consumers alike.

The ACCC guide sets out the following examples which it considers to amount to “major” failure of a motor vehicle:

The ACCC guide sets out the following examples which it considers do not amount to a “major” failure of a motor vehicle:

The ACCC guide provides some clarification as to what will constitute a “major” and “non-major” failures in the context of motor vehicles. However, the examples provided by the ACCC are reasonably clear-cut and we must await for further cases to be decided in the State and Territory consumer tribunals before more valuable guidance can be given in relation to more borderline cases.

We have experience in motor vehicle claims and can help if you are dissatisfied with the performance of your vehicle. For further information please don’t hesitate to contact: