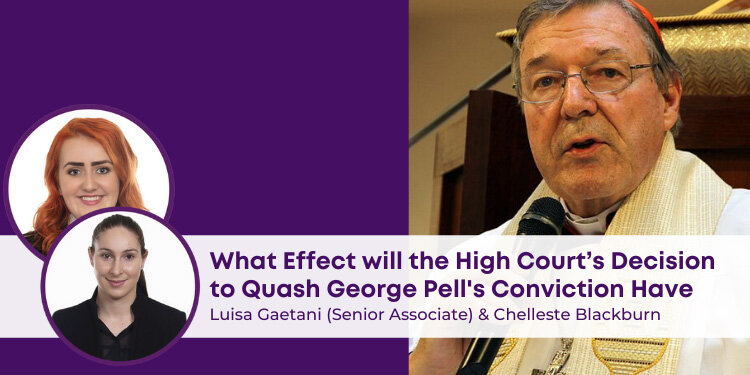 Cardinal George Pell has had a historic legal battle. From being the most senior Catholic in the world to have been found guilty of sexually abusing a child, to the High Court’s decision to unanimously quash his convictions, his two-year legal battle has garnered significant attention. Pell has been found not guilty of the charges and released from prison. For survivors of sexual assault, this has been a jarring event, however, this is one case and should not deter victims from seeking legal action. It’s important to explore the dynamics behind juries and understand this case is not a reflection of a standard response or status quo that will now be adopted. The criminal justice system will always seek to protect victims and bring them justice.

In 2018 Cardinal George Pell was convicted of child sex abuse charges and spent 405 days in jail before the High Court unanimously quashed the decision in a historic verdict on 7 April 2020 after a two-year legal battle. Pell was previously the financial controller of the Vatican and the most senior Catholic in the world to have been found guilty of sexually abusing a child. In 2018 a Melbourne jury unanimously convicted Pell on five charges, believing the complainant who gave evidence stating in December 1996, Pell had sexually assaulted him and another 13 year old boy in the priest’s sacristy after Sunday solemn mass at St Patrick’s Cathedral. Pell has consistently maintained his innocence throughout the years since he was charged in 2017 of abusing two choir boys in the 1990s. He was serving a 6 year jail sentence for this conviction. Pell attempted to appeal his 2018 conviction in the Victorian Court of Appeal, they upheld the conviction in a two to one decision. Pell’s lawyers then took it to the High Court, the highest judicial body in Australia. This is the final avenue of appeal. The High Court granted special leave to appeal against a decision of Victoria’s Supreme Court of Appeal and unanimously allowed the appeal. Pell’s lawyers argued that the Victorian Court of Appeal failed to take proper account of evidence which casted doubt on Pell’s guilt. In March 2020, Pell’s lawyers argued for two days in front of the full bench of the High Court’s Judges that the complainant being believable should not discount other evidence that placed his evidence in doubt. The argument of Pell’s lawyers was that the Victorian Court of Appeal may have been unduly influenced by the video recording of the complainant’s testimony rather than just reading a transcript of his testimony and evidence. The High Court ultimately granted Pell’s Application for special leave and made the unanimous decision to quash Pell’s conviction and acquit him. This means that Pell was found not guilty of the alleged offences and was released from prison, to return to his normal life.

In the High Court’s summary, they stated the Victorian Court of Appeal Judges “failed to engage with the question of whether there remained a reasonable possibility that the offending had not taken place”. The court found that other witnesses’ evidence was “inconsistent with the complainant’s account”. Chief Justice Susan Kiefel handed down the full benches ruling. “The High Court found that the jury, acting rationally on the whole of the evidence, ought to have entertained a doubt as to the applicant’s guilt with respect to each of the offences for which he was convicted,” the summary read. There was “a significant possibility that an innocent person has been convicted because the evidence did not establish guilt to the requisite standard of proof”, the bench found. Former choirboys who gave evidence of Pell’s abuse struggled to remember details regarding the church layout and choir procession almost two decades after the fact. In order to convict, the Jury had to believe without a doubt that the complainant, the choirboys, were reliable and honest. The Jury originally believed this, as did the Victorian Court of Appeals Jury, however the High Court found belief in the complainant as a compelling witness was not enough to convict. Victims of sexual assault should not allow this to dissuade them from coming forward in the future. It can be disheartening for current and future victims to see this decision handed down. However, this case has complex and unique circumstances. These circumstances won’t necessarily affect other jury trials. No two cases are the same and Pell won’t set the bar for future sexual assault cases.

The two alleged victims of Pell’s abuse and their families are struggling with the High Court’s decision. One of the choirboys that Pell was accused of abusing died in 2014, and the father is said to be “in shock” in the wake of the decision. Shine Lawyers represented this father and stated “He is struggling to comprehend the decision by the High Court of Australia … He says he no longer has faith in our country’s criminal justice system.” The surviving victim of Pell gave evidence during the trial. Victoria Police made a statement, stating that they respect the High Court’s decision and will continue to provide support to complainants involved in the case. Their statement said, “Victoria Police remains committed to investigating sexual assault offences and providing justice for victims no matter how many years have passed,”. The effect this ruling has had on other victims of sexual assault is significant and it is important to acknowledge this is one case, not a reflection of all future rulings. As Professor Gideon Boas noted, it’s important the public doesn’t view the high court’s decision as a challenge to the sanctity of justice. Likewise, the jurors in this case should not feel like they failed. Those questioning how the Victorian Court of Appeal got it so wrong must note, both the Victorian Court of Appeal and the High Court cases were heard by juries. As best explained by Professor Boas, “There is no system that is flawless. Some juries will give verdicts that are perverse or unreasonable and, sometimes, so will judges. But victims should know that overturning a jury decision happens rarely.” The jury functioned as they were required to, it is worth noting this situation is rare and not a case to measure all future success by.

Victorian Premier Daniel Andrews did not comment on the High Court ruling but he had an important statement to share with the public, “But I have a message for every single victim and survivor of child sex abuse: I see you. I hear you. I believe you.” Former Prime Minister Julia Gillard has also encouraged those struggling with the news to seek support from services such as Beyond Blue, which is the foundation that Ms Gillard is now the chair of. The Blue Knot Foundation is another mental health service, who run a helpline specifically for adult survivors of childhood trauma and since the High Court’s decision, they have experienced an influx of calls. Extra staff have been utilised to handle the increase in calls as stated by Foundation president Cathy Kezelman. “Our helpline has been inundated by survivors who are experiencing, rage, fury, disgust, distress.” Prime Minister Scott Morrison acknowledged the hurt many Australians may be feeling but said the “highest Court in the land had made its decision and it must be respected”. There is support for victims of sexual assault available. Victims have as much right to justice today as they did prior to this case. The complainant in this case issued a statement to reassure victims, “I would like to reassure child sexual abuse survivors that most people recognise the truth when they look it in the face.” Justice cannot ever be sought without the bravery of victims.

Dr Tyrone Kirchengast, a barrister and solicitor of the high court stated, “I think we have to also understand that justice isn’t perfect, and it can’t always be perfect. It’s the case that sometimes innocent people are convicted and guilty people aren’t, and what we strive for in Australia is a system that eliminates errors as far as possible.” The impact of a decision like this on the public is immense. It should not deter future victims from coming forward, this case is not an omnipresent prediction of every case. No system is flawless, and no jury is perfect. In Australia, the discussion between jurors and identities of jurors are protected, rightly so. However, this makes it difficult to discern how they come to decisions. Trial procedures are continuously being reformed in order to reduce the chance of errors in the Australian court system. The system does the best it can, the case of George Pell is not a standard case or a prediction of the future. It is one case under extremely unique circumstances. Every case after it will be based on the evidence in that case and the results are yet to be delivered. Its important society continues to understand this fact and victims feel supported and safe in coming forward. If the question is, how will this case affect future cases, then the answer is, it’s unlikely that it will. The circumstances are too unique and the situation too different for it to affect all future cases, if any. Do not let this conviction alter your decisions for yourself.

If you need help, the below services are always available: