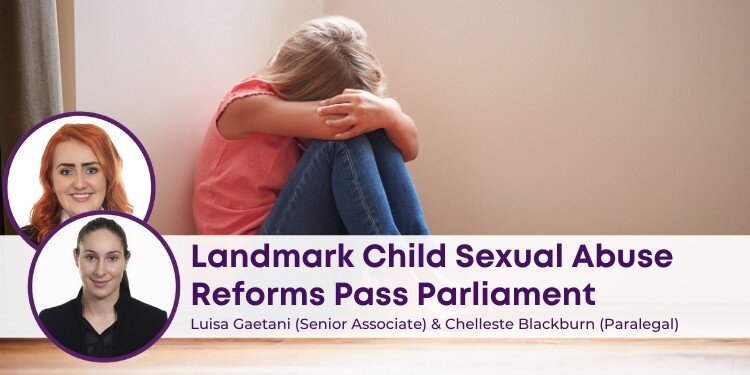 A significant barrier preventing child sex offenders from being held accountable will now be removed due to nation leading reforms passed by the NSW Parliament on the 3rd of June 2020. Attorney General Mark Speakman has noted how significant this achievement is for survivors of childhood sexual assault. Mr Speakman stated, “today marks a significant milestone in our fight against the scourge of child sexual abuse”. The Evidence Amendment (Tendency and Coincidence) Act 2020 is a huge step forward which will enable more evidence about an accused person’s sexual interest in children to be considered by a jury in child sexual assault proceedings, as explained by Mr Speakman. The Royal Commission into Institutional Responses to Child Sexual Abuse found the exclusion of this kind of evidence has led to cases of ‘unwarranted acquittals’ in child sexual offence proceedings. These reforms are significant because they will allow greater admissibility of evidence in proceedings such as these.

Reforming laws cannot undo past crimes and mistakes. It will not take away a survivor’s pain, however, it will help to deliver justice for survivors across NSW and improve the experiences and outcomes for future victims. These efforts prove Australia is aiming high and driving to continue to make our criminal justice system an accountable, fair system. These reforms will allow relevant evidence to be put before the court whilst aiming not to compromise safeguards that ensure a right to a fair trial. NSW is the first jurisdiction that agreed to introduce a Model Bill and is now leading the way for other Uniform Evidence Law states and territories. Hopefully it will forge a path for them to follow in NSW’s footsteps.

The hope is that these new reforms will lead to more perpetrators being sent to jail. These changes could allow multiple allegations and evidence from previous trials to be aired in one trial. They could pave the way for allegations from previous trials to be revisited by the jury. These reforms seek to resolve a huge issue in child sexual abuse cases, which is that commonly, an offender will be a repeat offender and juries aren’t given this information. These reforms will ideally give victims the confidence to come forward as they will have a greater chance of conviction.

These highly important reforms commenced on the 1st of July 2020. As Mr Speakman stated, “The NSW Government has led the nation in its response to the recommendations of the Royal Commission. I call on other states and territories to follow NSW’s lead and introduce these crucial reforms”. It is moving to see NSW’s forge towards better protections for victims of child sexual abuse and a positive sign for the example it sets nationwide. This news comes as the NSW’s government seeks to propose additional legal changes to further protect young people from exploitation while considering reforms to mental health laws. Hopefully this milestone reform is setting a trend for continued positive change in these areas of law.