Can a Personal Criminal Charge Warrant a Dismissal at Work? This is Not Always the Case. 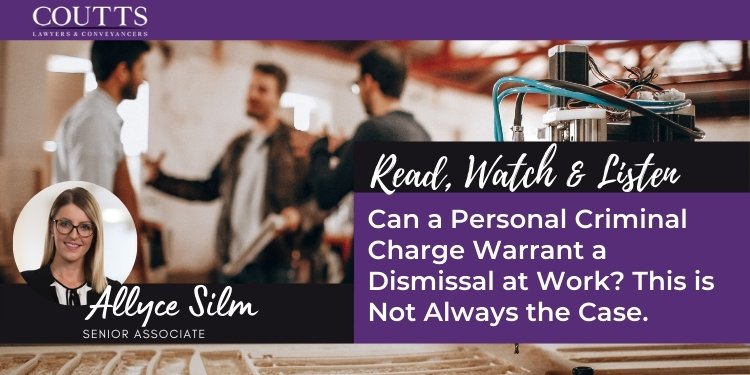 How much does your personal life intersect with your professional life? An employer has recently come under scrutiny in the Fair Work Commission (“FWC”) after terminating an employee for losing their driver’s licence, despite this having no inherent connection to his work.

So, could losing your driver’s licence in your personal capacity create further consequences for you at work? The FWC has held that when deciding whether personal conduct outside of work equates to a breach of conduct in the workplace, which could give rise to termination, they will look to whether the offence has a requisite connection to the employee’s role.

Often, it is expected by employers that when going about your personal life, you carry yourself in a way that reflects your obligations as an employee (at least to a certain extent). However, there has recently been some discussion within the FWC surrounding how these obligations and compliance with misconduct policies intersect with their personal lives.

A recent case heard in FWC, namely, Bobrenitsky v Sydney Trains [2021] FWC 3792 (“Bobrenitsky”) saw an employee file an unfair dismissal application for being terminated due to the loss of his driver’s licence. The applicant, Mr Bobrenitsky had been working as a train driver with the respondent, Sydney Trains, since 2005.

Whilst driving outside of work, Mr Bobrenitsky was charged with high range drink driving and his licence was subsequently suspended. He openly discussed this suspension of his licence with his employer and was highly remorseful. The employer then suspended Mr Bobrenitsky’s employment, whilst they conducted their own internal investigations. During the investigation process, the employee provided reasons explaining his behaviour, stating that he had hit “rock bottom” after experiencing multiple deaths of friends and family in the past 12 months, causing him to suffer from bouts of depression and anxiety. In addition to this, the employee had voluntary admitted himself to various professional help programs and sought leniency from his employer.  Following this, Mr Bobrenitsky was formally convicted of the offence and his licence was suspended for 6 months. As a result, his employer found that the allegation was substantiated, that the employee was in breach of the employers’ code of conduct and proceeded to terminate him for misconduct. The Respondent relied on their code of conduct, which required staff to immediately notify their manager if they were charged or convicted with a serious criminal offence and that the employer’s reputation can be affected by the employee’s actions outside of the workplace.

The FWC considered whether there was a valid reason for the termination – specifically, whether or not the offence was considered to be work-related conduct. The FWC held that the drink driving offence lacked a requisite connection to the applicant’s employment and this reason for termination was not valid because it took place outside of work hours, and further, that the employee was not “on-call” or due to report for his duties until the following morning. In addition to this, the FWC noted that holding a driver’s licence was not an inherent requirement of the applicant’s role, meaning that he did not require possession of a driver’s licence to perform his role. The FWC also relied on an earlier case of Rose v Telstra Corporation Ltd and commented that “an employee is entitled to private life. The circumstances in which an employee can be validly terminated because of their conduct outside of work are limited.” The FWC also looked at the hypothetical risk of damage to the employer’s interests and found that there was no risk to its interests or reputation.

As a result of the above, the FWC held that the employee’s dismissal was harsh, unjust and unreasonable, which is the test for deciding whether an employee has been unfairly dismissed. In looking at the employer’s position, the FWC found that it had not established a sound and rational evidentiary basis for its loss of trust and confidence in the employee. The FWC noted that the offence had been dealt with in the appropriate jurisdiction and ordered the reinstatement of employment and compensation for the lost wages between the date of dismissal and the date of reinstatement (less the notice period paid to the Applicant).

What does this mean?

This decision helps distinguish the test for whether a personal criminal offence could affect an employee’s employment status. It also highlights that whilst an order for reinstatement is often rare due to a breakdown in the employer and employee relationship, it is still relied upon as a primary remedy if the FWC deems it as appropriate.

Among other things, the test that the FWC will use is whether the offence has a requisite connection to the employee’s role or position. For instance, if this employee was a taxi driver or delivery driver the employer would have grounds to argue that having a driver’s licence is an inherent requirement to their employment. However, in using their discretion, the FWC did not establish that this was the case in Bobrenitsky.

A Warning for Employers

Employers should therefore be cautious when dismissing employees for any personal criminal offences that do not have a requisite connection to their role. Whilst criminal offences are serious, they do not always give rise to a valid reason for dismissal and could expose employers to unfair dismissal claims.

Whether out of hours conduct can be used for the purposes of termination is to be assessed on a case-by-case basis, and, we recommend obtaining legal advice first prior to carrying out any disciplinary actions relating to an employee’s conduct in their private life.

This case has again highlighted the importance of having airtight policies in place for employee misconduct, and, the importance of carefully considering whether you have a valid reason to dismiss your employee. If you are unsure, we always recommend that you contact the friendly Employment Law team at Coutts to obtain the appropriate advice.