Sentencing discounts in NSW and the EAGP scheme: the benefits of entering an early guilty plea 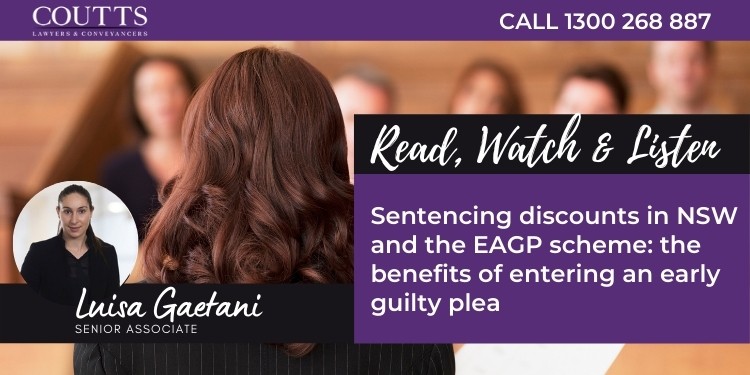 In both the Local and District Court of NSW, defendants in criminal proceedings have the opportunity to enter an early guilty plea for a discount on sentence. Although the notion of getting a ‘discount’ on a criminal sentence may seem bizarre to many, these statutory sentencing regimes were designed to reduce delays in the criminal justice system, conserve public funding for policing and legal bodies, limit prolonged distress to victims of crime, and prevent further inconvenience to witnesses of crime.

What is a sentencing discount?

In the case of R v Borkowski (2009) 195 A Crim R 1 at [32], a “sentencing discount” was described as a quantifiable reduction in the sentence a defendant would otherwise be given due to the perceived “utilitarian benefit” of an early plea. As expressed by the High Court in Siganto v The Queen (1998) 194 CLR 656 at [22], a plea of guilty has a utilitarian benefit ‘on the pragmatic ground that the community is spared the expense of a contested trial’. By having a criminal matter resolved in its early stages, it saves the expenditure of public resources funding Courts and Legal Aid, allows for police and DPP resources to be allocated elsewhere, assists in reducing the backlog of cases in the system, and can potentially prevent further distress and trauma to victims of crime as they are longer required to give evidence or be subject to cross-examination. Additional to the utilitarian benefit of an early plea, defendants can benefit from entering an early guilty plea in circumstances where their case is not strong enough to secure a finding of not guilty following a hearing or trial – after which they will be exposed to the maximum penalties available at law.

Sentencing Discounts in the Local Court

In the Local Court, defendants are eligible for up to a 25% discount on sentence for guilty plea entered at the early stages of their matter – usually on the first mention date. For instance, if a person were sentenced to 2 years imprisonment but they had entered a plea of guilty at the first opportunity, they may receive an 18 month term of imprisonment after the full 25% discount is applied. Despite this, it is important to remember that Magistrates ultimately have a broad discretion as to whether to apply a discount on sentence and to what extent it is to be applied.

The introduction of the EAGP Scheme

The “Early Appropriate Guilty Plea” or “EAGP” Scheme was introduced through the passing of the Justice Legislation Amendment (Committals and Guilty Pleas) Bill in 2017, following a 2014 enquiry by the NSW Law Reform Commission (“NSWLRC”) into identifying opportunities for legislative and operational reforms which would encourage early guilty pleas in criminal proceedings.

Late guilty pleas were identified as causing major inefficiencies in the criminal justice system due to the diversion of police resources away from other duties, depletion of public funding for Legal Aid and the ODPP in preparing for trials that are aborted, and causing prolonged distress to victims and inconveniencing witnesses. Statistics generated as a result of the report highlighted that in 2013, 83% of committal matters ended in a guilty plea, 35% of guilty pleas were entered after committal, and up to 66% of late guilty pleas were entered into on or after the first day of trial.

The NSWLRC attributed the cause of major delays in the Local and District Court to the perceived inefficiency of the committal process, and the purpose of introducing the new EAGP scheme was to streamline the committal process by ‘improving productivity and ensuring that cases are managed effectively’, and to provide a statutory framework for sentencing discounts in accordance with the timeliness of a plea being entered.

The EAGP scheme introduced several key changes to streamline the committal process in NSW by way of mandatory procedural requirements and timeframes. Under the EAGP scheme, the prosecution are now required to provide “early disclosure” of prosecution evidence prior to charge certification. This allows the prosecution to elect charges to proceed with on indictment, and aids defendants in obtaining legal advice in relation to a plea at an earlier stage in proceedings. The scheme introduced mandatory “case conferences”, whereby the defence and prosecution participate in a conference prior to committal to determine whether there are any offences that the accused will agree to plead guilty to, facilitate charge negotiations, and assist the parties in identifying key evidentiary or factual issues in dispute at an early stage.

Overall, it is important for defendants to criminal proceedings in both the Local and District Court to consider the benefit of an early guilty plea and seek legal advice in relation to the sentencing discounts that apply if a plea is entered at various stages of proceedings. For many defendants, entering an early guilty plea may signify the difference between receiving a full time custodial sentence and a sentence served in the community.

Luisa is a Senior Associate at Coutts and head of our Family and Criminal Law divisions. Luisa has practiced solely in the areas of criminal and family law. It is her sensitive yet pragmatic approach that has allowed her to develop a strong rapport and build trusting relationships with her clients. Should a client’s matter proceed to court, Luisa has the skillset and experience to assist her clients through this process and where required, will draw upon her network of barristers to further benefit her client’s outcomes.