Drones, you and the law 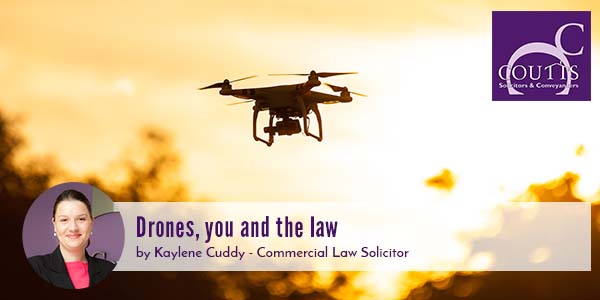 Drones are becoming more common. Although used for some time for agribusiness, map-making and by surveillance organisations and insurance companies, smaller drones are now readily available – in fact, they seem to be one of the top Christmas gifts for 2016.

Be careful what type of drone you buy – drones that are 2 kgs or more, need to be registered with the Civil Aviation Safety Authority (CASA). Anyone piloting these drones also needs to obtain an Operator’s Certificate before they can start flying the drone in public airspace. Where public airspace begins is not straight forward, unfortunately, there is no clear boundary. Serious drone operators should consider purchasing maps from CASA.

From 26 September 2016 onwards, if you are operating a drone that is less than 2 kgs, you will be permitted to pilot that drone during the day as long as it remains within your line of sight, rises no more than 400 feet from the ground and is more than 30 metres away from members of the public. By remaining within 400 feet from the ground, you should stay out of public air space, but bear in mind CASA can declare public airspace for particular events or for emergencies. However, there are quite a few circumstances that will effectively cancel out this ability, including:

Be aware that if anyone operating a drone commits any of the above breaches they can be fined up to $8,500.00 per offence.

Local Councils have the power to ban drones in public places such as parks. However, the Council will not generally be able to regulate the airspace in their area.

This is certainly an area of the law that is lagging behind technology, however, after 26 September 2016 new laws will provide some comfort to members of the public who are concerned about the increased use of drones and the perceived invasion of privacy. Currently in Australia, the “right” to privacy currently only extends to personal information.