Friendly Behaviour Does Not Constitute Consent 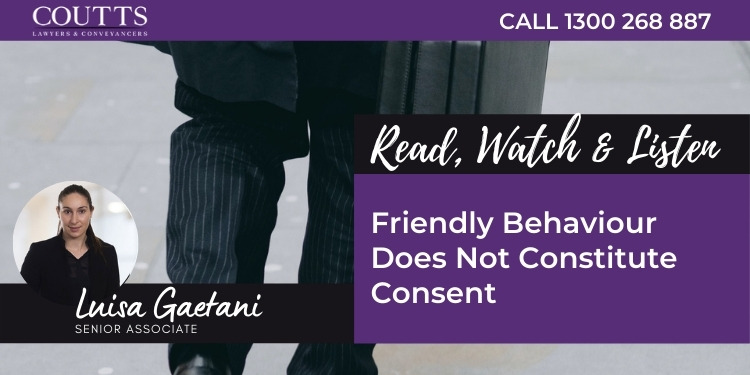 A recent event has highlighted the fact that sexual misconduct and assault is not acceptable from anyone in any position in society. Consent is paramount to engage in any type of activity and must be prioritised above all else. Every individual deserves to be respected and it is important to understand that friendly behaviour or banter does not constitute consent.

Ronald Tarlington was a cop with 25 years on the police force. He was charged with sexual touching without consent in March. In February he was found guilty of sexually touching a colleague over an incident that occurred in December 2018 by Magistrate Paul Mulroney. He pleaded not guilty to this charge. Despite the relatively lenient penalty of an 18 month conditional release order, Tarlington launched an appeal against his conviction and sentence. His recent appeal against his conviction for sexually assaulting a colleague was thrown out by Judge Jennie Girdham.

The offence of sexually touching an adult carries a maximum penalty of 5 years in prison in the District Court. If it is finalised in the Local Court, it is 2 years. Due to this, a sentence of an 18 month conditional release order could be viewed as Tarlington being treated with leniency based on his Police career. Further to this the NSW Police suspended him but did not terminate him.

The December 2018 incident occurred at a pub for kick-on drinks after a Christmas party. Tarlington and the woman ended up both attending this event. Initially the pair chatted and hugged. At this point Tarlington grabbed the woman’s bottom which made her uncomfortable. The court was told she felt awkward but shook it off, not wanting to worry about it.

Later in the evening when she was within the same group as Tarlingon, he grabbed her breast, squeezing the nipple and made a growling sound whilst wearing a smirk. The woman immediately told others in the vicinity that “Tarlo just grabbed my boob”. She was crying and distressed. The woman later testified that she felt “dirty” and “belittled” after the incident.

The Crown’s case rested on the woman’s evidence, along with statements of witnesses who she had spoken to immediately after the incident and CCTV footage of the night.

During the appeal, Tarlington argued that the woman’s evidence was inconsistent and the story she told colleagues immediately after the incident and the one she told police had changed. Judge Girdham said the woman was an “honest and credible” witness who had given a straightforward account of the incident with “no embroidery”.

Judge Girdham stated that the friendly interactions between the woman and Tarlington prior to the incident did not make the touch consensual.

She stated, “I completely reject any assertation that the friendly behaviour was such that he could have reasonably believed there was consent”.

The Judge found that Tarlington did not consider whether the woman had consented, “he just went ahead and touched regardless”. Tarlington’s original sentence of an 18 month good behaviour bond was upheld.

Judge Girdhams belief that friendly behaviour does not constitute consent is a highlight to take away from this case. Consent is not a smile or a hug. It is a genuine desire to proceed conveyed clearly and verbally. Consent is now defined under s 61HE of the Crimes Act 1900, under this section a person consents to sexual activity – such as sexual touching – if he or she freely and voluntarily agrees to it.

Section 61HE of the Crimes Act 1900 provides a further explanation of when there is no consent if the alleged victim:

No act should be undertaken without the consent of the other party and consent is a necessary requirement in any relationship or situation in life. Tarlington’s conviction demonstrates that no individual is above the law and all victims should feel safe in coming forward.