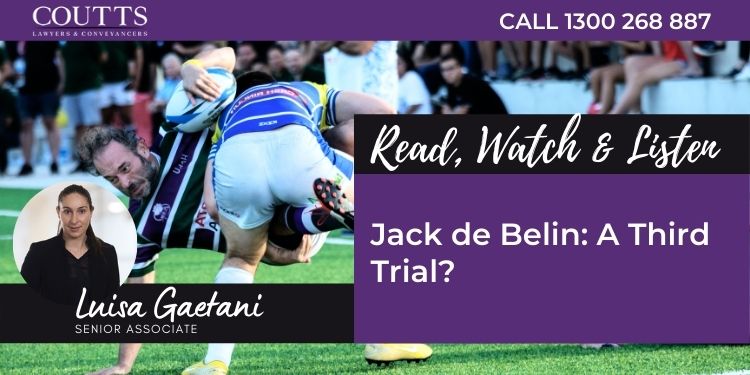 Jack de Belin, a famous first-grade NRL player with the St George Illawarra Dragons, has been stood down since December 9, 2018, due to the NRL’s controversial no-fault stand-down policy. De Belin and a friend, Mr Sinclair, were charged with the sexual assault of a 19-year-old woman after meeting in a North Wollongong nightclub.

Following these accusations, the pair have had two trials. The first trial resulted in a hung jury on all counts with the jurors incapable of reaching a unanimous or even a majority finding. The outcome of the second trial? Not guilty on one charge and still unable to reach a verdict on the other five.

Meanwhile, with the NRL trying to combat a growing increase in the, sometimes violent, misbehaviour of players off the field, a controversial NRL rule was created. This rule found that any player charged with a criminal offence with a maximum jail term equal or greater to 11 years is automatically suspended until a verdict is found or the charges are dropped. But is this fair when the judicial system has been trialling de Belin’s case for over 2 years?

De Belin did challenge the rule in the Federal Court, however, the judge overwhelmingly sided with the NRL’s rule. Stating that it was the responsibility of the central sporting administration to manage and grow the commercial interests of the sport, and due to incidents like Mr de Belin’s, there was a dilution in the value of future broadcasting deals and sponsorships.

In the wake of de Belin’s second trial, the NRL has stood by their decision to keep the controversial rule. However, they have confirmed that if the DPP does not pursue another re-trial, de Belin will be able to play for the Dragons. A decision is expected regarding whether a third trial will be pursued on May 28.

The emotional impact of a hung jury must be acknowledged. Many criticisms find that hung juries place more emotional stress and trauma on the victim having to re-live and once again go through the process of cross-examination regarding their statements. This can also be another trauma for a defendant who is later found to be innocent.

With the Me-Too movement and others like it enabling more and more victims to voice their traumas, hung juries may become more prevalent within the Australian judicial system hindering the ability to provide judicial justice.

Luisa is a Senior Associate at Coutts Lawyers & Conveyancer and head of our Family and Criminal Law divisions. Luisa has practised solely in the areas of criminal and family law. It is her sensitive yet pragmatic approach that has allowed her to develop a strong rapport and build trusting relationships with her clients. Should a client’s matter proceed to court, Luisa has the skillset and experience to assist her clients through this process and where required, will draw upon her network of barristers to further benefit her client’s outcomes.