4 Do’s and Don’ts when your house is being broken into. 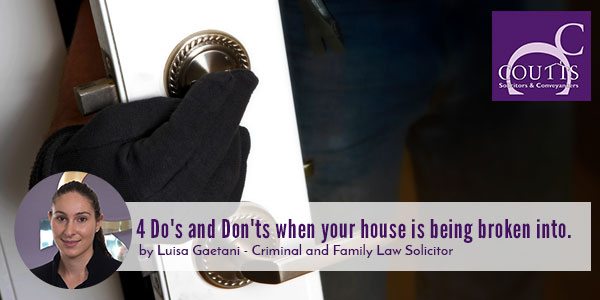 Generally, when a person’s home is being broken into, they automatically assume that they have the right to fight the intruder and/or assault the intruder because the intruder is trespassing in their home. Unfortunately, the law does not account for homeowners having a right to fight or hurt an intruder, and this mentality is what sees a lot of people experience the Criminal Courts across New South Wales.

So the question then is: what should you do if your house is being broken into?

What shouldn’t you do if your house is being broken into?

Things to consider before you approach an intruder if you decide not to take the above advice:

Do not be a hero in these circumstances – you could be placing yourself and/or your family in a very dangerous situation.

You should ensure that you have good measures in place for your home security to limit the chances of having your home invaded. Also note that if an intruder is injured during their attempt to break into your property as a result of a homeowner assaulting them, they may have a right to claim through the civil courts, against the homeowner.

If you have been charged, or need advice in relation to a criminal law matter. Coutts Lawyers & Conveyancers, we have a team of criminal lawyers who can assist you in Campbelltown, Sydney, Narellan, Camden, Tahmoor, Hunter Valley, Wollongong & Parramatta locations in Australia. Contact her on the 24 hour emergency hotline 02 8324 7527.