Brianna is from the local Camden area. She attended St Patrick’s College Campbelltown and has always had a great interest in social justice and mental health, participating and organising fundraisers and awareness for mental health organisations such as R U OK? Day. Brianna’s was chosen to represent her school at the National Schools Constitutional Convention in 2015. This involved attending the NSW parliament house and discussing the recognition of Indigenous Australians in the Constitution. Her passion was recognised by her peers, which resulted in her being chosen to attend the Convention at Old Parliament House in Canberra to discuss whether Australia should have a Bill of Rights.

While studying her double degree, Brianna has worked in administrative, receptionist and customer service roles, which are reflected in her attention to detail, communication skills and organisational abilities. Furthermore, she has also contributed to the Macarthur community and enhanced her legal knowledge by volunteering weekly at Macarthur Legal Centre for over three years, as both a Student Advice Volunteer and a Volunteer Paralegal.

Brianna travelled to Mexico in 2019 to study Immigration and Human Rights, where she had the opportunity to visit and volunteer at refugee centres and study at La Salle University in Mexico City. She attained an overall first place rank of 91% in the course.

When she is not working, Brianna enjoys dancing, spending time with her family and pets, and travelling. 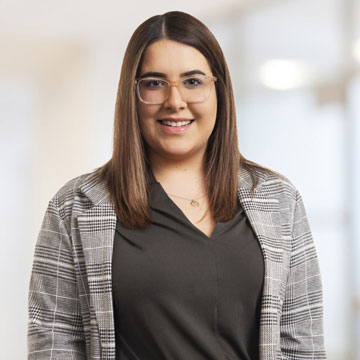 Contact Brianna today to chat about your Employment Law and Injury Compensation matters.