How to Catch a Catfish 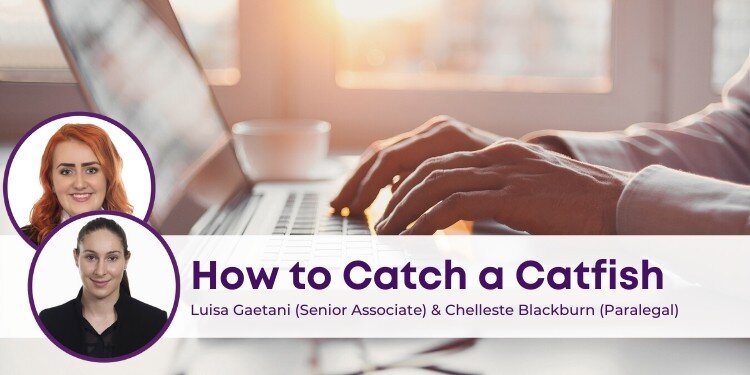 Catfishing is an emerging phenomenon. It occurs when a person creates a fake profile on social media with the intent to deceive to abuse someone else. This can occur through taking their money or otherwise manipulating and controlling them. In Australia there is no specific crime of catfishing, however, there are many different behaviours involved in catfishing. Some of these behaviours come under various existing offences and can be prosecuted. It is an occurrence which young people today need to be highly aware of in this new age where everything is unrestricted online.

A part of catfishing includes financial fraud which can be prosecuted in Australia. A Canberra woman created an elaborate and false online profile on a dating website in 2018, she lied to men on the site about having cancer and ultimately obtained more than $300,000. She pleaded guilty to 10 fraud offences. Another crime associated with catfishing includes stalking. In 2019, a Victorian woman was convicted of stalking and sentenced to a period of two years and eight months in prison for impersonating actor Lincoln Lewis.

Even more serious is when a catfisher lures in children to engage in sexual activity. This offence is protected under s 66EB of the Crimes Act. The act of intentionally procuring and grooming children under the age of 16 for unlawful sexual activity is a crime. The prosecution must prove that the intention of the relationship was to create a sexual relationship when the offence in catfishing. This particular offence is also covered under Carly’s law, s 474.25C of the Criminal Code Act 1995. This section means any adult who utilises a service such as a phone or internet to undertake actions intended to cause harm, engage in sexual activity or procure sexual activity with a child is committing a criminal offence. This demonstrates the importance of monitoring children’s activity online for their protection.

Catfishing can often involve emotional and psychological manipulation; this is more difficult to convict in comparison to fraud and threats. When the result of catfishing is psychological harm rather than physical, it can be difficult for prosecutors to identify an appropriate criminal charge. This is an area of law that requires further expansion to keep up to date with the modern world.

An example of the detrimental effects of catfishing is the case of Renae Marsden. Renae was a victim of catfishing and the effects of the behaviour ultimately led to her death. Renae was psychologically manipulated and deceived by an old female friend who created a fake online identity as a man. Renae and the “man” engaged in a relationship purely through technology and exchanged thousands of Facebook messages and texts over a period of two years. This relationship effected Renae’s personal life and she believed this man was the person she would marry. When he ended the relationship, Renae disappeared. Renae took her own life in 2013 as a result of the emotional trauma she suffered. A recent coronial investigation into her death found no offence had been committed by her perpetrator. This highlights the flaws in dealing with this new crime. Deputy State Coroner Elaine Truscott, the coroner in Renae Marsden’s case described the conduct of Renae’s catfisher as “appalling” and an “extreme betrayal of the trust of her friend”. Magistrate Truscott observed:

“Where ‘catfishing’ is without threat or intimidation or is not for monetary gain, then the conduct appears to be committed with the intent to coerce and control someone for the purpose of a wish fulfilment or some other gratification. Though such conduct may cause the recipient mental and or physical harm because it is not conduct committed with the necessary intent it falls outside the parameters of a known State criminal offence.”

This case demonstrates the need to consider creating options to prosecute these offences. Alternatively, we may reconsider how to apply the law. Catfishing can be covered under s 192(e) of the Crimes Act (NSW) for financial deception. Under s13 of the Crimes Personal and Domestic Violence Act (NSW) for stalking and intimidation. Existing state criminal offences such as manslaughter may apply to these cases. The circumstances of catfishing may lead to causing reckless grievous bodily harm, possibly including psychological harm, in circumstances where a reasonable individual would realise the victim could be exposed to a risk of serious injury. This may constitute manslaughter or could be considered an option. Other options include making coercive control an offence under state laws. In March 2020, NSW Attorney-General Mark Speakman announced he would consult possible new coercive control laws. Renae Marsden’s father, Mark Marsden, asked a potent question after the inquest into his daughter’s death, “How can anybody put somebody else through mental torture on a grand scale and come out of it on the other end and not be accountable to the law?” Catfishing can destroy the lives of those it touches, its necessary to exercise extreme care when interacting online.

It’s important to note that anyone can fall victim to catfishing. Some important tips for catching a catfish include:

In the new digital age, its important people are aware and proactive when interacting online. While waiting for potential new offences in this rapidly emerging field, individuals should ensure we make use of the laws we have to protect people from the devastating damage that can be caused by catfishing.

Luisa is a Senior Associate at Coutts Lawyers and Conveyancers and head of our Family and Criminal Law divisions. Luisa has practiced solely in the areas of criminal and family law. It is her sensitive yet pragmatic approach that has allowed her to develop a strong rapport and build trusting relationships with her clients. Should a client’s matter proceed to court, Luisa has the skillset and experience to assist her clients through this process and where required, will draw upon her network of barristers to further benefit her client’s outcomes.